Best Electric Boogaloo gets my vote.

If you’re still undecided about the election, go to YouTube and search for “Barack Dancing.” Then, ask yourself the very important question: Who would you rather see dancing at the Inaugural Ball?

Michelle and Barack? Or Cindy and John?

The answer seems clear until you remember Wildcard Couple Sarah and Todd. And SP’s “Roof is on Fire” moves and Dance Face showcased on SNL last week. If the Republicans lose Nov. 4, I SO want to see her on next season’s Dancing with the Stars. 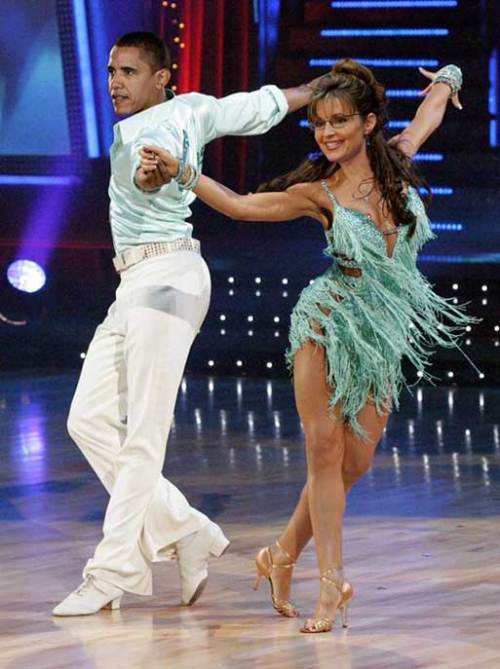 I think my redirect trumps ’em all.

Yesterday, through the wellspring of information that is Twitter, I learned that John McCain owned the web site http://www.voteforthemilf.com. If you Twitter, you probably saw it too. Up until late yestereday afternoon, the URL DID redirect to McCain’s site. And then people were saying he DIDN’T own it. And after all the press, it mysteriously came down. If you’re interested, read this. She explains it in detail.

And then my co-worker, QB, told me that Obama owned www.votefortheblackguy.com. Go ahead. Click it. Goes right to Obama’s site.

Maybe they own the URLs, maybe they don’t. Thinking about it makes my brain swell.

Sometimes, out of sheer boredom, my college boyfriend and I would hang out late nights, drink a few beers, and make up phone sex phone numbers. I’d tell him, “dial 866-hot-dude” or “866-hor-ndog” or something stupid. (Sorry, if I tell you the really nasty ones, I’ll get all kinds of freak show traffic. I’m betting you can use your imagination.) We’d giggle like schoolkids and crack up when a woman with a sexy voice ALWAYS answered. It was a recording, of course, so we were never charged. Which meant we could keep it up FOREVER.

Inspired, I tried http://www.votefortheoldguy.com. No luck.

And I was sorely disappointed when http://www.voteformommypie.com didn’t redirect to the McCain/Palin site.

Which would be schweet.

Yesterday I found out Obama Twitters. So, just for fun, I signed up to follow him. He has 33,109 followers, and he follows 34,002. His campaign’s a finely tuned marketing machine. They don’t miss a beat.

So, I checked out Hillary’s site to see if she Twitters. She does. She has 4,019 followers, and follows … NO ONE. Can you say bad marketing move? MAJOR faux pas in my humble opinion. Unless, of course, the goal is to convey total disinterest in her constituents.

Take notes from O, Hill. Nothing says “I care” more than THIS in your inbox. 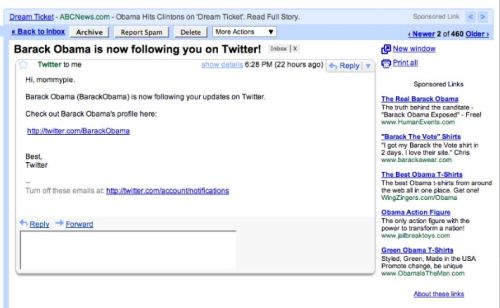 I feel so important.

I checked out McCain. No Twitter. The man is Twitter-less. Probably not a great move either. Even if he can’t keep up with technology, the least he could do is keep up appearances.

So, because I’m all about equal opportunity, I was going to add all three to my list, just to see what they were talking about. I wound up only adding Barack, purely because his Tweets were slightly more interesting than Hillary’s. Slightly.

They could all do sooo much better. How about sexin’ it up a bit? Let me peek into your life a little deeper. Chances are, it wouldn’t sway my vote either way (which, btw is completely up in the air, and even if it weren’t, I probably wouldn’t tell you. Nothing personal. It’s just that I’m a lover, not a fighter.), but at least it would be interesting.

And who do they think they’re kidding? Does anyone really believe the candidates are truly the ones posting the actual Tweets? At a minimum, they should get aides with a sense of humor.

See what I think about when MP naps?

Mkay. Done with the political stuff. Until I post co-work QB’s most excellent pics and commentary from the Obama rally last week …