A dark day in Smalltown USA.

This is the post I’ve been avoiding writing. I didn’t want to dwell, but feel the need to record what was a shocking and sad day in my hometown.

The blast took with it a beloved local bar, a restaurant, an art gallery, and a children’s store. In an instant that fateful morning, four buildings that had stood over 100 years … vanished. Windows as far as five blocks away were blown out. And adjacent buildings lucky enough to still be standing were quickly ravaged by fire.

MP and I were in the car, driving to town minutes after it happened. She pointed out the massive black plume visible 10 miles in the distance. My first thought was that a plane had gone down. We heard otherwise as we walked through the door to her preschool.

Once at work, information began pouring in. I learned the art gallery was affected and immediately thought of Tara, an employee. I knew her because my dad was a long-time exhibiting artist. I knew her because she was the little sister of a boy I went to high school with.

I called Bobo, told him the news, and expressed my concern about Tara. “Naah,” Bobo said. “They were never in before 10. She’s fine.”

Only she wasn’t. Tara had gotten to work early that morning, and was talking to her friend on the phone when the line went dead. People have speculated that’s when she flipped a light switch that ignited a natural gas leak, although no one really knows. It took three days to recover her body.

Amazingly, Tara was the only one to die. Had the explosion happened 12 hours later, it would’ve taken with it a bar and restaurant full of patrons. It’s hard to think about. The ‘what-ifs’ are too heavy.

Just three days prior, The Boy and I were in the bar that’s no longer there. Having a beer and a shot on a Monday afternoon. 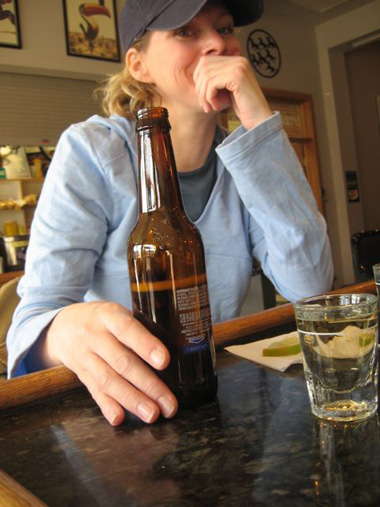 This could very well be the last photo that was taken inside those walls. Damn, life is short.

Filed under Left To Pick Up The Pieces

Tonight, as is the routine, when MP and I arrived home she bolted from the car and ran to Grammy and Poppy’s house. And just as I always do, I packed up backpack, lunchbox, sippy cup, artwork, boots, the mail, my bag, etc., and hauled the lot to our house next door.

I dropped everything at the door. I started MP’s bath. I went to the bathroom. I let the dog out. I walked out the door to go get MP.

And when Grammy asked if we wanted to stay for spaghetti dinner I said yes without hesitation.

An hour later, our bellies full, MP and I made our way home, across the driveway and up the snow-packed walk. Once in the door, out of habit, I walked directly to the bathroom to start MP’s bath. And a sick panic welled in the pit of my stomach.

Suffice it to say, the bathroom was effectively submerged. Water, water, everywhere, and not a mop in sight. I may or may not have used a few choice words. MP’s first reaction, on the other hand was to pull up her pant legs and puddle-stomp. Okay, I did a little stomping too.

But then I remembered my little Christmas gift to myself this year, sitting new and unused in the laundry room.

And now, I am officially a devout member of the Cult of the ShamWow. (And, all right, I DO love Vince’s nuts.)

Filed under Piece of Pop Culture

I’ve been a very bad blogger. Between The Boy’s visit, Swap Mamas — which I’m OBSESSED with, btw — my town literally EXPLODING, and MP’s 5th birthday … sadly, the old blog has gotten the short end of the stick.

I figure the best way to catch up is a laundry list. Which brings me to:

1. The Boy. The yummy, lovely Boy. He folded my laundry. He fixed BOTH my toilets. He fixed Grammy’s sad front door, which has been held shut by an old screwdriver the past few weeks.

Doogs. He GAVE THE DOG A BATH. 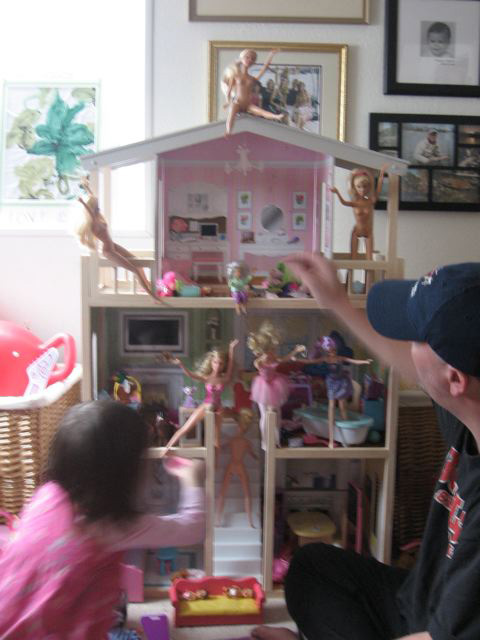 The Boy even taught her a new game. Mardi Gras House.

Wait. Isn’t that a reality show?

Although admittedly, both of us were perfectly content to stay home and hang out, we DID take a few nights to ourselves.

Remember the pharmacist Grammy was dead set on fixing me up with? We ran into him at one of downtown’s popular pubs. (We all went to high school together, the pharmacist was a class ahead. Small town. Yadda yadda.) He parked himself at our table for a good 45 minutes and DIDN’T. SHUT. UP. He talked SO much, he didn’t even notice when The Boy smiled and texted me the following:

GUYS REALLY DO ONLY TALK ABOUT THEMSELVES!

Later, at another bar, sitting side by side, *I* didn’t even notice when The Boy texted me. 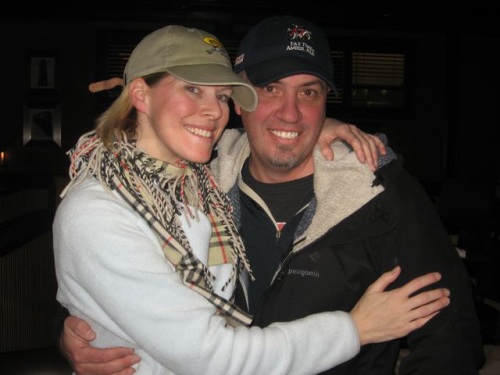 Seven days of The Boy, and not once was I ready for him to go home. Given the fact I’ve lived alone for nearly 15 years, trust me, this is no minor detail. When he left, I cried.

And now, in a complete change of direction, it’s looking like The Boy will be back this summer.

Unbelievably, he’s decided to pack up and move back home. Granted, there are some pretty major things that need to be worked out before the moving truck arrives, but it feels RIGHT. It feels good. It feels like it’s meant to be.

Oy. I’ve blathered on and on, and now it’s 1:30 in the morning. Mommypie’s gotta catch some zzzzzs — falling asleep at my desk every day is becoming a dangerous habit. The laundry list, like the laundry pile parked on my couch, will have to wait ’til tomorrow.

In bed at one thirty? THAT’s discipline, People.

Tagged as life, relationships, the Boy

Because really. Is there anything better than AI and Checkers?

THE BOY IS HERE!!

He arrived at 1:00 this afternoon, it’s now 9:30 and so far, so good. Okay, so far, so FANTASTIC. We’ve already been to Costco together, gone out for a romantic fast-food taco lunch, had a little nap, toured MP’s preschool, eaten pizza with Grammy and Poppy, entertained ourselves with American Idol, and as I write this, he and MP are engaged in a rousing game of Checkers.

On average, The Boy and I talk about 3-4 hours a night. Sometimes he’ll be on Facebook on his end of the country, and I’ll be on Facebook on my end of the country. Which is apropos, considering it’s how we reconnected with each other. It’s also dangerous, seeing how we’re both 11-year-old boys at heart who enjoy nothing more than hijacking mutual friends’ pages. We also enjoy Ding Dong Ditch, crank calls and flaming dog poo on doorsteps, but I digress.

So now, for your amusement, because it’s late, and I got nothin’, here’s a little something from last night. Read THIS and tell me we’re not perfect for each other. I dare ya.

My apologies for the sloppy Witness Protection Treatment. Meh.

Filed under Piece of My Mind

Hostess with the Mostess I am not.

So, a few weeks ago, I thought I’d try something completely new and organize a real-time, online swap meet on Swap Mamas. It was scheduled for this past Saturday. However, I’ve spent every spare minute each night on the phone with The Boy, and Saturday night was no different. While the two of us talked, I tried to log into the Swap Mama’s Chat Room. And couldn’t get in. Because my computer sucks donkey dookie lately. Some hostess, eh?

The Boy took over for me, entered the Chat Room from his end of the country and struck up a conversation with two of my favorite bloggers, Auds at Barking Mad, and Mrs. Waltz from Waltz in Exile.

While I wish I still had the chat on record, it seems large chunks of it magically disappeared hours later. And never having actually SEEN it myself, my only account is second-hand. I’d love to hear Auds and Waltz’s version (Hear that Doogs? Blog Fodder!). From what I could make out, while I was drowning my frustration in Bud Light, the threeway went something like this.

• Not knowing The Boy’s true identity, Auds and Waltz begin to size him up.

• Auds and Waltz become increasingly suspicious, and ask if The Boy has a blog.

• They ask if he even has kids.

• They wonder out loud if The Boy is trolling.

• The Boy tells them he’s on the phone with me and that I’m trying to get online.

• A&W warm up to The Boy, figuring he must not be TOO creepy.

And suddenly, my online life and my real life collide. The Boy is laughing. I am laughing. I’m pretty sure Auds and Waltz are laughing.

And the next day? The Boy and I did what any couple mad for one another in 2009 does. We changed our Facebook profiles from “Single” to “In a Relationship.”

What a girl wants. Or not.

So, Facebook ads. Tailored to my profile. A 40-year-old single woman.

Is THIS one of those great guys? Do you think his mom knows he’s in his room with the webcam right now? ‘Cause, OMG, he’d be, like, soooo busted.

Thank goodness he has enough sense to keep that v-neck on.

Last night, MP emerged from her room, walked to the bathroom, and brandishing the pink plastic mobile part with both hands, looked at herself in the mirror.

“All right, let’s see what this baby can do.” Snarly face. Machine gun sound.

Um, WHAT? (Trust me, it wasn’t easy to keep a straight face.)

“I’m not,” she says, still pointing her Tommy Gun at her reflection.

And then, like the Master of Misdirection she is, MP began sawing the countertop.

Okay, I know it’s more of a boy thing, and might sound a bit out of character for a four-year-old girl, but I gotta admit … I’m not really all that surprised.

This is the child who, earlier this week, as we were rushing into preschool purposefully spilled her lemonade from its sippy cup, leaving a yellow trail in the snow. Laughing to herself, and clearly VERY pleased with her effort, she noted that people were going to think it was pee.

My daughter is Beavis.

Filed under At Piece with Yourself

So Swap Mamas is off to a great start, thanks in big part to all of YOU! If you haven’t joined yet, um … helluu?? Wadda ya waiting for?

Go on! Get your butt over there!

With the exception of the most recent development in my life — that would be The Boy — I’ve been eating, sleeping and breathing Swap Mamas the past few months. And with the whole creative process, sometimes I veer off track.

I’m getting kinda bored with my tagline.

Here’s one idea — just do a little editing.

Or maybe sauce it up a bit.

Filed under Caption This

Okay, this is it. I’m unveiling my second baby. The reason I’ve pretty much dropped off the face of the planet these past few months.

I’m telling the economy to SUCK IT. Won’t you join me? I would be thrilled beyond belief if you stopped by SwapMamas, became a member (it’s FREE!), and helped me spread the word.

I’ve seen the amazing good that can happen when mamas come together — the possibilities are endless.

Can’t wait to see you there!