Sit down, have some plaid.

I joined the hoards of Twilight Moms a few weeks ago and went to see New Moon. Like there was any question I’d miss it. Please.

And I’ll admit, since then, the re-emergence of my Edward Cullen obsession has been … troubling. Not only did I purchase the Twilight DVD so I could watch it the night before New Moon, I’ve watched it … oh … a good seven times since. The other day at Target, I caught myself pausing at a Twilight promotional endcap to fondle the Edward action figure.

Aaaannnd … admitting that makes me nauseous.

Don’t ask me to explain. I can’t. The screenplay leaves out major portions of the book. The acting sucks. I think it even got WORSE in New Moon. Kristen Stewart, in all her angsty-teen glory is 500 times more annoying this go around.

Which is why — HOOOLY HELL — when I saw this for the first time today, I howled.

[In homage to Jacob and the pack.]

Filed under Piece of Pop Culture

So, fairies. We’re big into ’em at The Pie House. Not to mention friendly giants (you can see them sleeping, carved into the mountainside overlooking our house), pots of gold, and all things magical and mystical.

Which brings me to Saturday, and the loss of MP’s second baby tooth. This meant another visit from the Tooth Fairy Saturday night, complete with more bedsheets dusted with silver glitter, and eight shiny quarters placed carefully under her pillow. (I lay down beside her and studied that tiny, beautiful face for what must have been 40 minutes, marveling at how quickly she was growing. She looks so much like her father when she sleeps.)

Sunday, there were many speculations about the Tooth Fairy. Like, when did she sleep? If she had to be in CHINA during the day, and HERE at night, that made no sense. Maybe fairies just DON’T sleep. And was there a fairy exclusively for boys and one for girls? And where did she/they live? MP thinks perhaps it’s in OUR house. Apparently, she hangs out with the Dog Fairy. That would be the one that rides Rosie’s tail and makes her chase it.

The fairy fascination has been around for a few years now — and, fostered by a little creative collaboration between The Boy and me, blossomed this summer during our last humid weeks in Connecticut. Fairy House hunting yielded the following results: 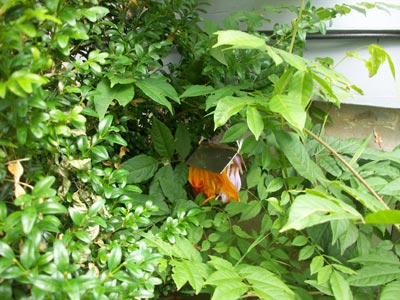 That last one? I like to think of it as the ZZ Top House of Fairies.

So where DO fairies live in the winter? Snow Huts? Igloos? Unless they follow the Fairy Elderly and hightail it to Florida, methinks I’ve got my work cut out.

Of kindergarten, superheros and apple bees.

Whatever. Don’t pretend you’ve never thought about it.

So, I’ve been absent in the blogosphere. Blame it on life. Starting a business. Relationship weirdness. Physical sickness. Sheer lack of time. The thing that REALLY bums me out though, is that I’ve failed to properly document the multitude of momentous happenings in the lightning fast life of MP these past six months.

Like reading her first book, cover to cover, all by herself. Green Eggs and Ham RULES.

The excitement of the first day of kindergarten.

And the day she came running into the house because she discovered this amazing sight.

That night it snowed, and the apples, along with the bees, froze.

Then, Halloween. Is it wrong that I nearly burst with pride, when, for the second year in a row, MP passed over the princess costumes in favor of superhero garb? Last year, Bat Girl. This year, Super Girl. Next year, Oprah? We don’t need no stinkin’ tiaras!

I even failed to get photos of the pumpkins. Which didn’t get carved until Nov. 1. Throwing a couple wigs on each one and calling it a day is apparently only funny for a few weeks.

And then there was the week she came down with the Swine Flu. Which, amazingly, thankfully, MP, my little Asthma-Baby, bounced back from in a matter of days.

And our fox. Who visited throughout the summer and fall, nearly every morning and every night like clockwork. Calm and completely devoid of fear, she’d sit under an apple tree and watch as we went about our business. (I love living here.)

And, arguably, the biggest event of the past few months … MP losing her first tooth. I DID record the first one. Now, the second tooth is loose and primed for the Tooth Fairy’s second visit. I give it two weeks at the most.

It all goes so fast. Today, as I sorted through her outgrown clothes, I couldn’t help but feel the tiniest bit of sadness. Any worry I had about her childhood passing too quickly, however, all but vanished as I exited her room.

And saw a giant booger smeared on the hallway wall.