The Tooth Fairy’s first visit to the Pie House.

MP spit a wad of blood into her palm (‘atta girl!) and offered me its contents — a perfect pearly pink baby tooth that had been clinging to life by a few gummy threads for DAYS. It was time.

We jumped up and down and, in our PJs, ran to Grammy and Poppy’s in the dark. 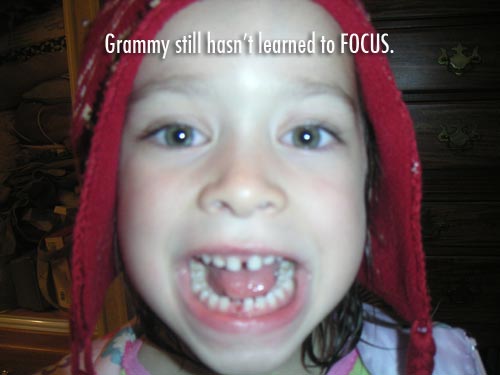 We called Bobo and told him the news. We called Uncle Pauly and told HIM the news, too, cutting things short when he told MP the Tooth Fairy usually brought $50 for the first tooth.

Turns out Uncle Pauly was wrong. Instead, this morning, MP awoke with silver fairy dust sprinkled in her hair and around her pillow, and a crisp TWO dollar bill under her pillow. Oh, and a small bag of jacks and a note from TTF herself.

And the wonder and joy of it all nearly made me cry.

So, Day Two in LA. You already know Day One was loaded with quality celebrity sightings … How, you ask, can it get any better?

Oooh, my friends, get better it does.

The day began once again on the Sony Pictures Lot (Did those 10 words really just come out of MY mouth?) where we had another course covering multiple Sony products, including their Handycam HDR-CX100 camcorder (which, in addition to recording amazingly crisp images, fits in a small evening bag! And it’s red!) and their Cyber-shot DSC-TX1 — Sony’s very cool new point-and-shoot. My two favorite features? The super easy touch screen (think iPhone) and an amazing panoramic capability like you’ve never seen before. (I totally sound like the ShamWow Dude, but it’s all TRUE.) 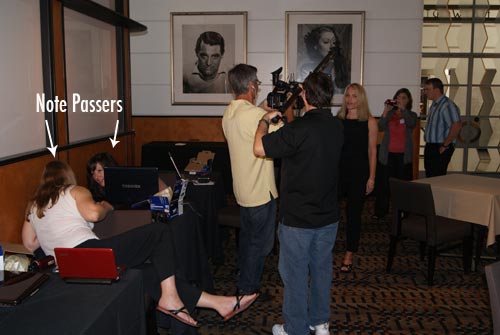 Here’s me with one of Sony’s new Alpha DSLRs. (That’s Digital Single Lens Reflex — highly coveted by bloggers.) We each had the use of one for three days and lemme tell you, giving that beautiful baby up at the end of the trip was HARD. Mommypie was very sad not to come home with one (hey, a girl can dream) — especially after such fantastic instruction by Photographer Me Ra Koh (LOVE her). It’ll take awhile, but I may have to save my pennies … 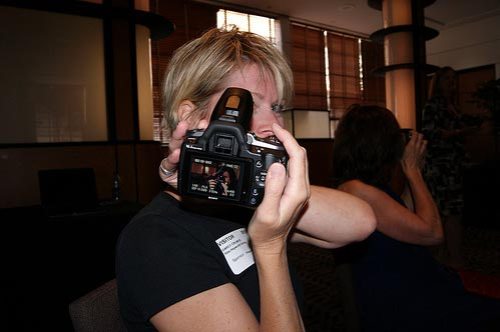 So back to the agenda. We knew that the following day we’d be attending the premiere of the animated children’s movie “Cloudy with a Chance of Meatballs.” (Get it? We’re moms?) As a special bonus, we learned that we’d also be sitting down with some of the actors and the directors for round-table interviews, which is where we went after lunch. (Again. Did that phrase really just come out of MY mouth?)

We talked to Bobb’e J. Thompson, who plays (er, voices?) Cal Deveraux, son of Earl Deveraux, voiced by Mr. T, who, in my opinion, stole the show. But more about that in the next post. 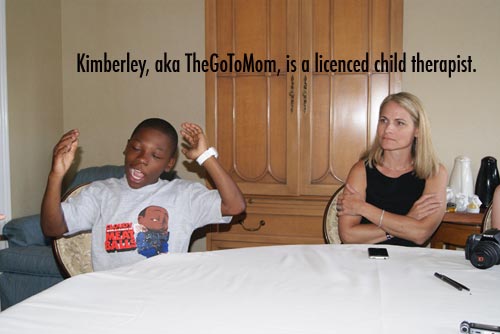 He was quite the entertainer.

We interviewed the directors, Phil Lord and Chris Miller, two self-described (and completely adorable) geeks. Phil totally reminded me of Cory Haim. Minus all the drugs. I could’ve eaten him with a spoon.

The interviews wouldn’t have been complete without the stars, Anna Faris (I have to admit, I had NO idea who she was, even AFTER meeting her), and Bill Hader. (Who I only knew as That Guy Who Plays Creepy Characters on SNL That Make Me Want To Wash With Lava.) 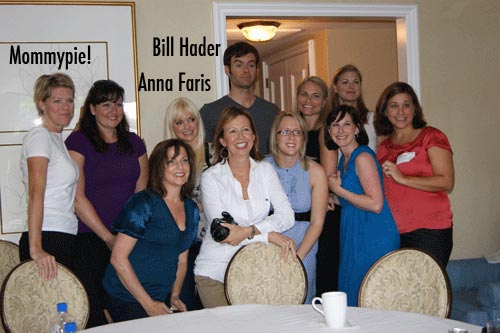 Anna was charming and smart and cute as a baby bunny. (Oh, and btw, I have since watched House Bunny and now see what all the fuss is about. Hilarious. ‘Sweet Balls’ is now officially my favorite expression.) Bill was flat out funny. And he strung words together like “fucking weird,” which I dug, because it was real. Honestly, they were all surprisingly real. The fact that they were outnumbered by nine mommy bloggers might have had something to do with it … we’re very maternal, you know.

Other notable Second Day Moments? Sitting in the [very YOUNG] bar at The W in Westwood with my new BFF Karen Sugarpants later that night. The two old chicks in the corner Twittering? Yeah, that was us. I think I actually sent Phil Lord a Tweet that the Sony Moms wanted to eat him with a spoon. Or something.

The only thing better? That Beth Blecherman came down IN HER PAJAMAS to drink with us 15 minutes after we’d left.

So Doogs, last week took a bit of a surreal turn — Sony Electronics flew nine mommy bloggers, including yours truly, to LA for a little tete a tete. 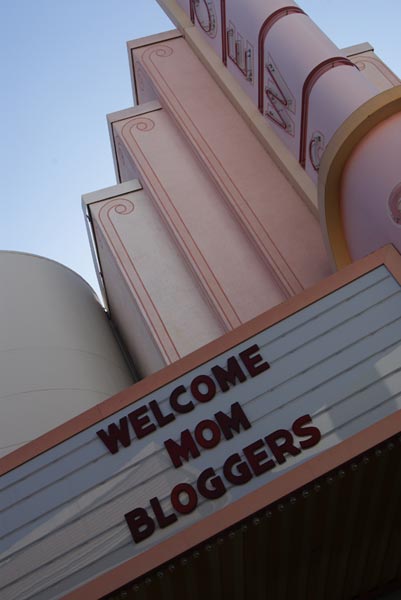 Crazy but true. I have so much to tell you, it’s definitely gonna take a few days. I thought I’d start with a little sampling of my many, many celebrity sightings and brushes with greatness on the Sony Pictures Lot. 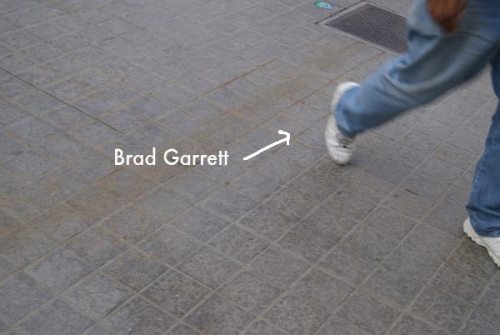 ‘Memba him? Everybody Loves Raymond? Apparently he has a reality dating show now. (In his defense, the Mom Jeans don’t do him justice.) 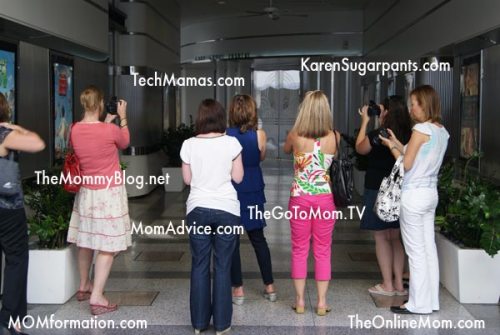 Then, unbelievably, one of my secret boyfriends cruised by. 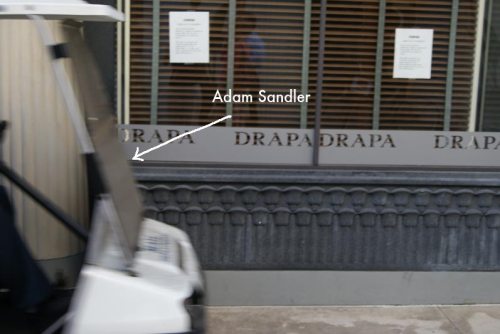 You can’t tell, but his golf cart is made out of gold.

And here’s the guy who told us where we could find Cameron Diaz and Seth Rogan … but we didn’t hear it from him. *wink wink* 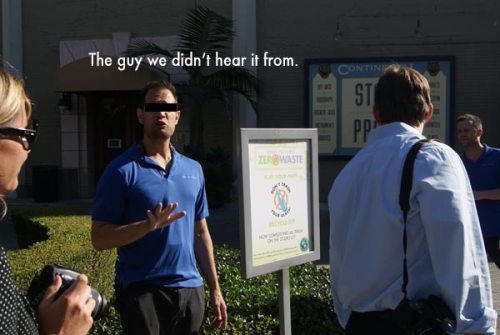 No matter — no Cameron. No Seth. We DID see the new, top secret set of Jeopardy though. AND the set of a new Cher movie. Now, if only the two could somehow be combined … Alex Trebek in Bob Mackie … Ooohmommyblogger, THERE’s a show I’d watch. (The dream sequence potential ALONE is almost enough to make me break down and buy TiVO.)

Yeah, not really, but when it’s this dumb, it makes me laugh.

♥ Singlesnet – is the best online place to meet people! ♥
Get immediate access phone numbers and email addresses
takes only 2 minutes to complete form and find fiends or love!!

Dude. If there will be Thriller Zombie Dancing, I’m in.