Last night, MP emerged from her room, walked to the bathroom, and brandishing the pink plastic mobile part with both hands, looked at herself in the mirror.

“All right, let’s see what this baby can do.” Snarly face. Machine gun sound.

Um, WHAT? (Trust me, it wasn’t easy to keep a straight face.)

“I’m not,” she says, still pointing her Tommy Gun at her reflection.

And then, like the Master of Misdirection she is, MP began sawing the countertop.

Okay, I know it’s more of a boy thing, and might sound a bit out of character for a four-year-old girl, but I gotta admit … I’m not really all that surprised.

This is the child who, earlier this week, as we were rushing into preschool purposefully spilled her lemonade from its sippy cup, leaving a yellow trail in the snow. Laughing to herself, and clearly VERY pleased with her effort, she noted that people were going to think it was pee.

My daughter is Beavis.

Filed under At Piece with Yourself

So Swap Mamas is off to a great start, thanks in big part to all of YOU! If you haven’t joined yet, um … helluu?? Wadda ya waiting for?

Go on! Get your butt over there!

With the exception of the most recent development in my life — that would be The Boy — I’ve been eating, sleeping and breathing Swap Mamas the past few months. And with the whole creative process, sometimes I veer off track.

I’m getting kinda bored with my tagline.

Here’s one idea — just do a little editing.

Or maybe sauce it up a bit.

Filed under Caption This

Okay, this is it. I’m unveiling my second baby. The reason I’ve pretty much dropped off the face of the planet these past few months.

I’m telling the economy to SUCK IT. Won’t you join me? I would be thrilled beyond belief if you stopped by SwapMamas, became a member (it’s FREE!), and helped me spread the word.

I’ve seen the amazing good that can happen when mamas come together — the possibilities are endless.

Can’t wait to see you there!

Hell, I already have the hypoallergenic dog …

Foolery did it. So I had to do it.

My slogan was “LET THEM EAT PIE,” but somehow, that didn’t sound right.

Go make your own campaign poster at obamicon.me and if you post it, include linkage in the comments. It’s fun! It’s easy! And best of all, it’s yet ANOTHER way to dick around at work!

Here’s something about The Boy I haven’t told you. We actually went out on a few dates a lifetime ago. 1985. We were high school juniors.

I vaguely remembered it, but wasn’t sure if it was one date or two. And I only remembered odd details, like blowing bubbles in his living room, and sitting on a dock overlooking a pond. The rest resides somewhere in the Mommypie abyss alongside Econ 101, misplaced Chuck Taylors, AND, with the exception of the Chicken and the Road, any joke I’ve ever heard. I can NEVER remember the jokes, dammit.

The Boy remembered even less. Which started the hamster wheel turning. I’ve kept a journal pretty much since the age of 10. What were the chances I WROTE about the date? Or dates?

It only took about 10 minutes to find. Which, considering I keep EVERYTHING — every letter, every card, even old calendars saved for their notations — was a small miracle in and of itself.

There were four pages dedicated to The Boy. I sat on the floor of the closet and laughed out loud. Really. I LOLed. Which I never write in comments or texts, because … seriously, people. No one’s REALLY LOLing when they write LOL. And if you hadn’t already guessed, they’re definitely not ROFLing either. OR laughing their asses off.

Anyhoo, apparently I was diggin’ The Boy in the ridiculous way only 17-year-old girls can. With bubble letters and lots of drama. There was a kiss — apparently a good one. BUT, it was the final week of summer and The Boy didn’t really “want to go back to school with a girlfriend, but would still like to date.” Magically, The Boy vanished from the pages of the journal, and was replaced with another short-lived infatuation.

Which kind of bummed me out. Not because The Boy was being … a boy. Because *I* was being SUCH A GIRL. Uck. Somehow, in my memory (which clearly cannot be trusted), I was so much COOLER than this cringe-worthy boy-crazy bubble-writing idiot. I’m not saying The Boy didn’t merit the attention — he WAS totally hot. And still is. But, HOLY CRAP. Looking at that absurd handwriting and reading those pages was JAB-A-SPLINTERED-CHOPSTICK-IN-MY-EAR PAINFUL.

And so, because I have absolutely NO shame, I read it to The Boy over the phone. We had a good laugh. I told him I’d been plotting revenge all these years.

And the journals went back in the box.

Filed under Piece of History

Five bucks gets you this on a Sunday afternoon.

Apparently I’m the last person alive to hear about the Mentos/Pop science experiment. (Or Mentos/Soda, depending where you live.) I stumbled across instructions a few weeks ago on the Net — Grandparents.com has a pretty cool download, 100 FREE Things To Do With Your Grandkid, which not only includes this little experiment, but a ton of other great ideas to entertain kids. And I’m not just saying that — I printed out the whole thing and kept it for myself. For reals.

So, I see this tasty nugget, think it sounds like good Pie House fun, tell a few people about it, and discover I have, in fact, been living under a rock.

However … just in case I’m wrong, and there are a few of you out there who are just as out of it as I am, THIS is what I’m talkin’ about.

Yesterday, I was gently reminded how dismally I’ve failed at basic blog duties. (How can I ever repay you, QB?) I never recapped New Year’s Eve. Criminey.

There were good friends. 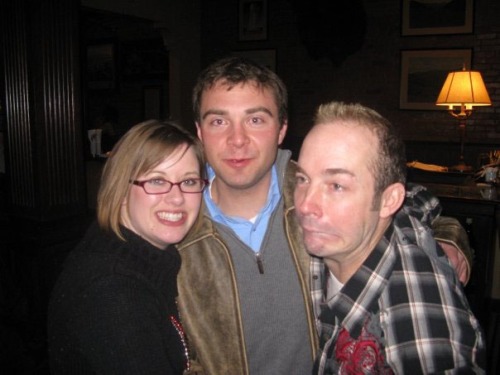 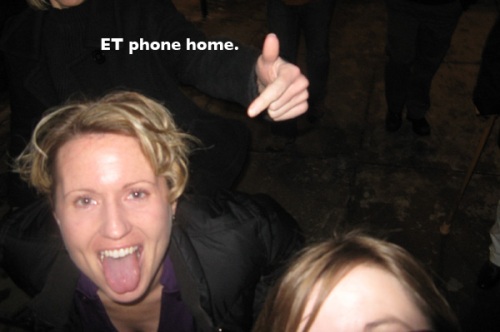 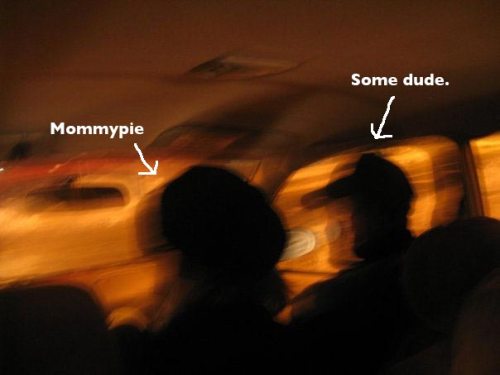 Crow with a side of fries, please.

I’m eating a little crow. Okay a big fat chewy one. Which is no simple feat, considering I have an odd affection for the breed. They’re just so stinkin’ SMART. I appreciate that in a bird. And now I’ve veered waaaay off course. And I feel like I owe ma Doogs a follow-up. 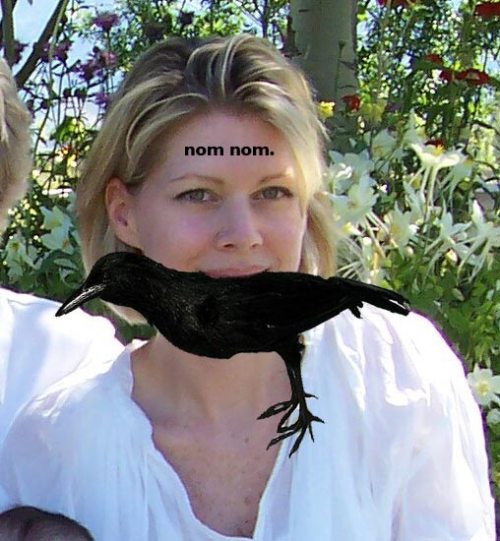 So, I’ve been known to bust on Facebook. Like here. And here. If I logged on once a week, that was A LOT. I didn’t get it. The Flair Requests and the Plant Requests and the You’re Great Requests. The Knighthood Invitations. The Gods of Metal Requests. (Awesome. Thanks Bro.) I STILL don’t get it. But for whatever reason, over the past month I started signing on more often. Once a week became a few days a week. And then a few more. And a few more. Just for fun.

And then, two short weeks ago, I reconnected with an old high school classmate. A boy. A very cute boy. And between emails, IMs, text messages and seven hour phone calls, we’ve been talking nearly non-stop ever since. Nevermind that we live on opposite ends of the country. Nevermind that inexplicably, I feel like I’ve known this boy forever. This has to be one of the craziest things that’s ever happened to me, and it’s got me a little discomboobulated, to be sure.

I committed a Cardinal Sin.

I told him about the blog. Which means he knows about the fart lighting. And my Taco Drive-Thru Guy. And the peeing in the shower. And the Granny Panties.

But, surprisingly, I’m actually completely okay with it. It’s kind of nice to be able to cut to the chase and say “Here’s me. No holds barred. Take me for what I am.” And after howling with laughter upon the realization that for days, he actually thought the photo in the Granny Panties post was ME holding up my own scary, ginormous GPs (It’s NOT, btw. It’s Bridget Jones. Honest.), I was absolutely astounded he was still around.

Remember the ZAZA ZOO I’m always going on about?

The laptop’s open. The page is blank. And the familiar late night drone of Poker After Dark fills the air. I watch the dog scoot across the carpet on her butt and try not to think too hard about it, completely resisting the urge to break out the steam cleaner. (At least tonight.) I’ll cut her some slack. She went to the groomer yesterday and came back with a Doggie Brazilian. Which, clearly itches.

All this blog fodder, and I got nothin’. To be honest, nothin’s been the case for a few weeks.

Mommypie is lost in thought.

MP did this drawing of me last spring. She said it was “Mommy Thinking.” It’s especially apropos now. Mommy DOES have a lot on her mind. Well, ONE thing, to be more specific.

I vividly remember my first crushes. They were tall, dark, handsome and larger than life. I was in the single digits. They were at least four times my age.

Dick van Dyke. Cute, goofy, and again with the dancing. What six-year-old WOULDN’T be smitten?

To this day, I still love them all.

Your turn. Spill — who was YOUR first celebricrush?