Out with the old, in with the new.

Tonight, if we’re lucky, a few friends (Gigi’s Daddy, QB, my friend Megan) and I will have succeeded in rounding up a large, raucous group of people to ring in the new year. 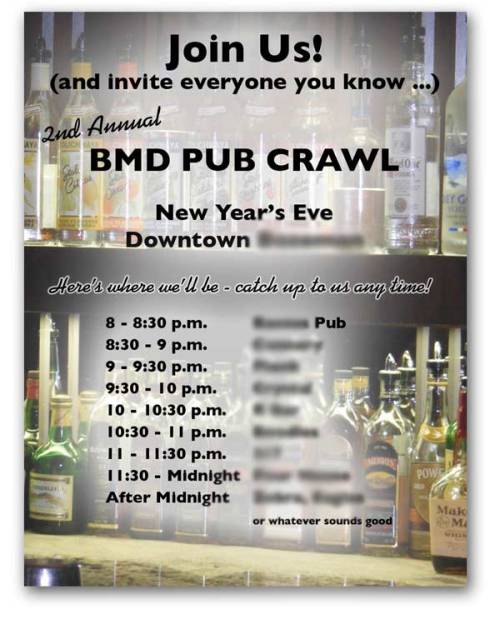 We sent out e-invitations yesterday. I’m nothing if not optimistic.

I’m feathering my hair just for the occasion. Maybe I’ll meet my Tommy Lee. Or Richie Sambora. Or David Spade. (Okay, yeah. This makes no sense to you right now because you DIDN’T watch the video.)

Wherever you are, whatever you’re doing, have a fantastic night, ma Doogs — can’t wait to hear all about it!

Sometimes I’m not sure who the four-year-old is.

ME: You’re THIS weird. (stretching arms out further)

ME: You’re weird all the way to the moon.

MP: You’re weird all the way to the North Pole.

ME: You’re weird all the way to another planet.

MP: You’re weird all the way to an ALIEN VACUUM. (jazz hands)

MP: Mommy I love you.

ME: I love you too, Sweetheart.

MP: How much do you love me?

ME: I love you all the way to the moon and back.

MP: I love YOU all the way to the planets.

ME: I love YOU all the way to the ALIEN VACUUM!!

Snowed in on Christmas Eve and the anticipation is painful.

MP: (Back of hand to forehead, high drama whine) It feels like I’m getting KILLED inside of me.

MP: Because I can’t open any presents. (falls forward onto couch) I can’t WAAAIT!

I told her the wait would be worth it. And it was. Santa’s Fur Real Kitty turned out to be a HYUGE hit. Although if it stops meowing or moving for more than five minutes, MP is sent into full-on panic. Eyes welling, lip quivering, she’ll ask, “Is she dead?” It’s enough to break my heart.

The Hannah Montana Styling Head was another Santa coup. And the ginormous dollhouse Grammy and I stayed up assembling until 3 a.m.? The look on MP’s face as she walked out to the living room four hours later was well worth any lost sleep on my part.

Speaking of notable moments … MP’s expression of sheer joy just barely topped Grammy’s reaction when she opened her As Seen On TV gift from Yours Truly — SHAMWOW! Oh, you have no idea how hard it was to bite my tongue after reading your comments in the last post …

As for me, I loved the packaging of this gift from Grammy almost as much as the cherished heirloom leaf bowls that were inside. 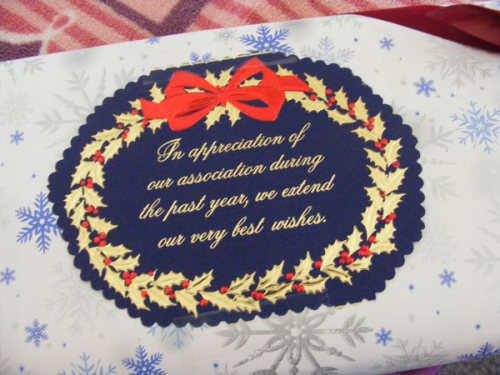 Hey, Grammy has a sense of humor! Who knew?

P.S. Without getting too pimptastic, I gotta give a BIG shout out to the Ear Check peeps. They sent me their AWESOME product to review and I seriously can’t wait to test it out. Which is kinda wrong, seeing as it would mean someone in the Pie House would have to be, um … SICK. Seriously, though, this is a fantastic gift for not only a medically obsessed person like me, but ANY parent. Now, when I suspect MP may have an ear infection, I actually have an instrument at my disposal that will allow me to measure her inner ear’s fluid level and and the likelihood of it being an infection. Do me a favor — show the Ear Check people some love, visit their site and check out their great product. I promise to post a follow up as soon as we get sick again – ha!

Ghost of Christmas Past

There’s this new carpet-shampoo-broom-thing commercial that comes on TV all the time. And every time we see it, MP goes crazy, telling me I MUST have it, and how much I really do want it.

She tells me I would like it for Christmas. Because I like to clean the carpet. (Truth be told, a clean carpet DOES make me insanely happy, but that doesn’t mean I actually ENJOY cleaning it.) I say oooh yes, I really WOULD like it. And at this moment, memories of Christmas past and all the cleaning equipment and kitchen accessories purchased for MY mom come rushing back.

I remember really believing she’d LOVE the can openers! And the hot mitts! And the dish towels!

Truth is, she probably did. Just like I love MP for wanting so badly to give me something she thinks I want. Never mind how many times I tell her what I really want is something homemade. She has her heart set on something store bought. As Seen On TV.

And I remember feeling that way too.

I never claimed to be Martha Stewart.

Last night, Grammy, MP and I made Christmas cookies — the sugar crash came fast and hard, and after a minor meltdown, MP was out cold. Christmas can’t come soon enough for that kid — every morning she wakes, crosses off another day on the calendar, and literally jumps for joy that we’re another day closer to SANTA!! I love, love LOVE experiencing the holidays through her eyes.

Which reminds me … if you haven’t seen the NORAD Tracks Santa site, go check it out. NORAD counts down until Santa takes off around the world and then “tracks” him. We’ve tracked Santa the last two years — not only does it help kids with the concept of other countries/states/time zones, etc., all you Internet addicted mamas will totally dig it. AND, while the kids are waiting for Christmas Eve to roll around, the site has some super cute (and somewhat educational) online Christmas games — MP gives ’em two giant thumbs up.

So, until the big night Wednesday, we’ll be saving a few select cookies for the Man.

Question is, WHICH ONES?!?

Is this not the BEST engagement photo ever?

Just when the whole marriage thing and the seeming impermanence of it all had me bummin’, someone steps off that pier and takes another grand leap of faith. And mine is renewed.

My step-sister is getting married. Is this not THE best engagement photo EVER?? It was taken minutes after her boyfriend proposed on the Brooklyn Bridge. Crazy kids.

Filed under Thrilled to Pieces

I have created a monster.

About a month ago, my brother calls me at work to ask how to use Facebook. A few hours later, he calls to say he was getting a flood of Friend Requests. The next day he calls to ask why all these people he didn’t know wanted to be his friend. Twenty-four hours after signing up, he was annoyed and swore he was going to stop accepting random friends.

So Monday, I get a text that he needs me to join his Mafia Wars family on FB — which is some kind of annoying FB game he’s already emailed and Facebooked me about — that I totally do NOT get and do NOT want to play.

I text him this:
U have a serious FB problem. Seek help.

Him:
Try this one on for size. DILLIGAF.

The phone rings. I answer.

Him: Does It Look Like I Give A Fuck!! Bwahaha!

Next day, I’m seated at a board room table with four business associates. My cell rings once. My cell rings twice. I get a text. It’s my brother: Call me.

I, of course, think something must be up. Something serious. I excuse myself, walk to the lobby, and call him back.

Him: Um, I need your help. It’s kind of important.

Him: I need you to join my mafia.

Him: (laughing) You just need to come up with a name for yourself.

Me: DILLIGAF. My name is DILLIGAF. I’m having a t-shirt made.

Which, speaking of … remember the Bamboo t-shirt conversation last week? QB actually DID have some t-shirts made. (That’s her below.)

Build-A-Bear Giveaway: We have a winner!

The winner of the $25 Build-A-Bear Gift Card is BETH!

Congratulations! Now go get yourself a new, unwashed bear!

You know what I mean.

Thanks MSNBC, for pointing it out.

Last weekend, MP, Grammy and I went downtown to participate in the annual Christmas Stroll, a tradition that’s been around for decades. At 4:30 Santa emerges from one of the town’s historic brick buildings, and, followed by throngs of children, makes his way two blocks to the end of Main Street. Once there, he hops on the back of a flatbed and, leading a chorus of Christmas carols, is driven eight blocks or so, ceremoniously lighting ancient holiday lights strung across each intersection.

Grammy excitedly led the push to get us close to Old St. Nick, hoisting MP on her shoulders and racing ahead. I kind of hoped we didn’t get too close.

This year’s Santa was frightening. In hindsight, I’m actually a little cheesed with the Downtown Association’s choice. Where was the full white fake beard? The big fat belly that shook like a bowlful of jelly? Until I learned who he REALLY was — turns out, it was Santa DJ, who I’ve met before — I would’ve sworn Santa was an underweight homeless dude who hadn’t bathed in weeks. The gray of his thin, scruffy beard looked downright dirty. Like even the fleas were jumping ship.

I couldn’t read MP’s reaction. She SEEMED excited. But skeptical. We headed to one of the Stroll activities — the very animated telling of The Grinch Who Stole Christmas. I hoped she’d forget about Santa Bum.

It wasn’t until we got home she spoke up.

ME: How did he look different?

ME: Well, he still has awhile before Christmas. I bet it starts getting really white and fluffy in the next few days.

GRAMMY: Maybe Mrs. Claus gave him a haircut and cut it too short …

ME: Yeah. He still needs to fatten up too. By Christmas, he’ll be nice and round.