I’ve decided I want to be British. Not all the way, just enough to use their awesomely awesome slang and swear words. (You know, Britney-British. All the fun of a sophisticated accent without the whole citizenship thing.)

So far, BALLS is serving me pretty well, but I need something that packs a little more punch. 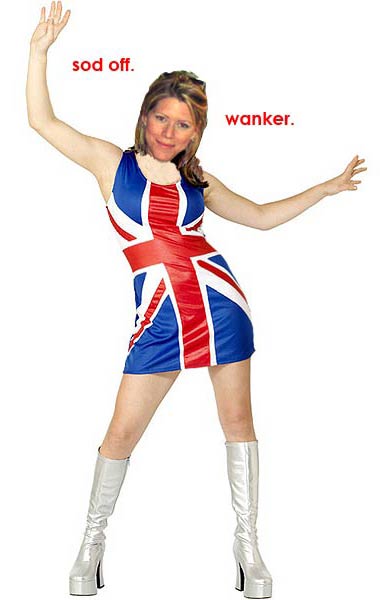 Are you KIDDING me? How fantastic is that? I don’t know what a Git is, but I LIKE it.

And when Bloody Git isn’t enough, there’s something about the Brits’ heartier euphemisms that make them somehow less offensive than ours. Even humorous.

Seriously, how funny is WANKER? Or telling someone to SOD OFF? Even PISS OFF has a certain charm.

Oh, I’ll probably pass on the accent. Because I’m not a crazy person. Unfortunately, BLOODY HELL just doesn’t sound right without it. But WANKER … I may just be able to pull that one off.

If not, I’ll just stick to BALLS.

Original image borrowed from these guys.

Filed under Bits and Pieces